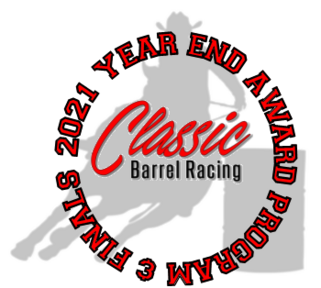 YEAR END AWARD PRESENTATION, FINALS & LOCATION
November 26, 27 & 28, 2021 | Triple Crown Equestrian Center, 3033 Gladding Road, Lincoln, CA. OPEN Finals will be a 1 Go Carry Over from an OPEN Class of the Black Friday Weekend Barrel Race and will be a $50 Entry Fee with 85% Payback. Year End Awards will be based on the number of contestants signed up for the Year End Award Program. The finals class will have limited awards as the Year End Program is 100% awards based and the finals class will be 85% payback instead of the standard 70%. All awards must be picked up by contestant or pickup arrangements must be made.

FINALS QUALIFICATION
Members must purchase a membership and enter/attend a minimum of 5 OPEN classes and pay a $5 finals fee in order for the run(s) to count. Example, if there is a two day race and you enter the Open each day and pay the $5 finals fee daily then you will have earned a qualifier for each open class entered for a total of 2 qualifiers for the two day race.  It is the responsibility of each member/contestant to sign up for the CBR Year End Awards Points Class/Sidepot for each event and pay the $5 fee.

Contestants will earn 50 points for attendance.

FINALS FEE
Contestants that pay their $5 finals fee and have paid the Classic Barrel Racing Year End Award Program Fee will be ranked/placed in a 4D format separate from the actual placing/payout. Points are based on horse/rider combination. 100% of the finals fee collected will go toward added money/year end awards the finals.

YEAR END AWARDS/POINTS
Points will be accumulated by Division (D’s) during the season. Highest points earner in the 1D, 2D, 3D and 4D. Placings in each D will depend on number of members. If you earn a year end award in more than one division (and you only have one membership) you will receive the higher award/placing in the Division not the higher Division. For example Susie Smith earns 4th place in the 2D and 2nd place in the 3D, she would then get the higher award/placing which would be 2nd place in the 3D.